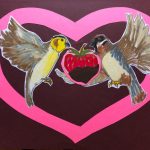 Recipe: 1 heaping cup of chocolate chips ½ cup heavy cream Pinch of salt Splash of vanilla   Note: You can melt this in the microwave but watch it carefully because chocolate chips always burn and melt unevenly so you’ll have to take out and mix every 10 seconds or so.   Directions: In a […] 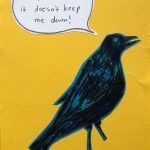 I walked by an inspiring blackbird in a parking lot the other day.  His foot was perfectly severed and had healed back cleanly, with no clumpy scar left over so his leg looked like a piece of dry spaghetti, except it was black.  And he didn’t care at all.  He was just hopping around in […] 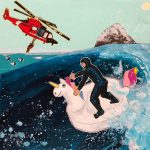 On New Year’s Day, my husband Britt and I drove our dogs out to San Francisco’s Ocean Beach.  We parked next to a guy that was about to go surf the jumbly, stormy waves.  Out of the back of his truck he pulled out an orange soft top board.  Britt and I exchanged eye rolls.  […] 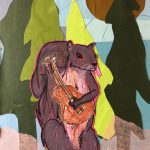 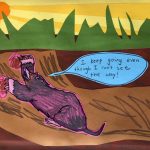 I’ve been feeling kind of, “Whah!  Poor me!”  lately.  Will I ever get to where I want to be professionally?  Is anybody out there who cares? Maybe it’s the political situation that is seeping into me and bumming me out.  The entire shutdown of the US government is not reassuring.  Or it’s last week’s head […] 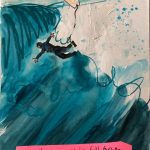 Here’s a comic about my wipe out at Ocean Beach on Thursday.